skip to main | skip to sidebar
A place for current and future students of trouser making, esp. those following the techniques and ideas of David Page Coffin, and the many examples in his multimedia workshop in a book/DVD package, Making Trousers, to gather for previews, announcements and discussion. Welcome!

In the photo below, notice the angle formed at the top of the bands when the finished pocket is expanded. Inevitable as this is, it's hardly noticeable when you're wearing such a pocket, especially if you've angled the underneath band down from the pocket mouth forward, as discussed in yesterday's post. Neither is the distortion highlighted at the circle in the same photo; these distortions melt away amidst all the other distortions and wrinkles worn trousers are subject to, the more so if the pants are not too tight. 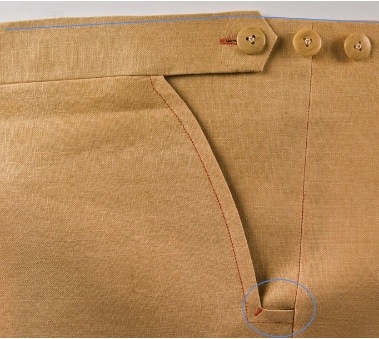 These distortions do clarify that the pant fronts are pivoting when a waist such as this is expanding—pivoting from the bottom of the pocket mouth—and this should make clear one significant requirement for any pocket of this type: The lower end of the mouth must be a good distance away from the waist to allow the pivoting to happen gracefully, or happen at all. So, amongst the many variations one could run upon this idea, including many possible shapes and treatments of the pocket mouth, you won't find anything like a horizontal opening, or one that doesn't put at least a good 6 inches [15cm] between the pivot point and the waist.

There remain a host of ways to play with the ideas presented by this pocket/band trick. Let's start at the top, with the closures at the waist. The diagram below suggests a few directions that came immediately to mind: 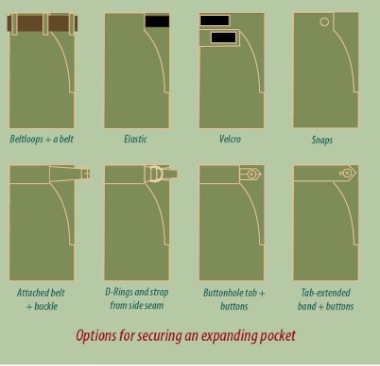 Note that the top row here shows a garment with no separate waistbands in front or in back, while the sample in the article, and all the lower-row examples, have a separate band in front, but simply an extended back, with what I call "cut-on" bands. This difference has no bearing at all on the actual closures you might prefer; any one of these shown could be implemented with either sort of band structure.

These solutions are all pretty conventional, taking traditional trouser closures and simply moving them to the top of the pockets. For a more casual effect, consider putting long soft ties where the tabs are in the article example; they could tie together in back…

Then consider the idea that these pockets could be the only way the pants close; make the slits a tad deeper on both sides and you could forgo a center-front or -back closure altogether. The main issue would be how wide do your trousers need to open to slip easily over your hips? You could insert a zipper in place of the slit on one or both sides, and if you left a slit above a short zipper, you'd retain the expandability.

Pants closing and opening only at the sides is not a new idea; it's essentially the way trousers used to work. They were called broadfall britches then, presumably because instead of spreading apart at a fly or other central opening in front or back, the front of the garment, when unclosed, would fall forward. Pockets were not necessarily integrated into the broadfall closure, as you can see in the following image from that link. But notice how the front is separate from the front band, which does close at the center. I can imagine lots of interesting ways to play around with a combination of my pocket trick and the broadfall tradition, such as joining the inner front band layers with a long, wide piece of elastic that stretched across the front from pocket to pocket, possibly split and snapping together at CF; might be a good thing to pair with that ties-in-back idea above… 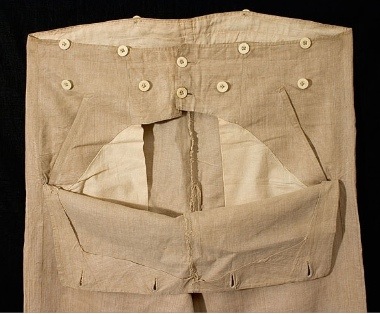 Elastic is the treatment I chose for the expanding-pockets variation I chose to detail in my book. Here's a couple of pictures:

I hope you're getting the idea that not only are your pockets and your waistband potent areas for experimentation, innovation and redesign, but also that maybe the whole art of garment making can be about these things, too? For me, they're the best part.

So, herewith I close this series on the Moveable Waist, leaving it open of course for any future questions or comments. Next up, sometime in the next few weeks or so, a video on copying existing trousers without taking them apart.

But for now, I think I'll go do a painting…

My Stuff at Amazon